Despite the fact that I killed every plant I tried to grow when I was younger, I ended up working in agriculture. In suburban Atlanta, the front lawn was as close to a field as I would ever reach. Year after year, we would browse through the gardening section at Home Depot to set up some perennials, only to see them wilt from dehydration after many forgetful and reluctant watering days. In my limited conception of the food system, a farmer picks all fruit from a tree and drives it directly to the store, and packaged food comes from a factory where big machines squish fruit into fruit roll-ups. My interest and understanding began to peak, though, as childhood trips to the BlueBell ice cream factory on the outskirts of Atlanta, walked me through the process of milk production from cow-grazing fields to pasteurization machines. In the midst of this, I became fascinated with how we transformed our natural resources into all of the food we consume and the power we had learned to unleash from the land, the air, and the water.

As an undergraduate studying political science and anthropology, I nurtured a dormant love for farming and ignited a commitment to rural communities. With a tenured Harvard professor, I researched how cocoa certifications in West Africa impacted small versus medium-holder farmers; studying the positive and negative effects of policy, intergovernmental organizations, as well as international consumer demand. It finally allowed me to visualize all of the different factors that impact agriculture on an international scale. Later, I discovered my mother had grown up on a small poultry farm in Guyana, something she rarely spoke of. She did not have pride in her farm upbringing, which I believe is a key impact of international agricultural development. Systemic, economic change is often felt first by the people in rural, agricultural communities. Do I believe I can build a successful life here for myself and my children? Am I proud of where I am from? As the most important employer in rural communities, restoring and transforming the agricultural system can provide both tangible resources and opportunities as well as hope.

Too many young women and men are dying or being exploited across the African continent and drowning in the Mediterranean in search of opportunities they should be able to build at home. We should seek to develop and adequately fund actionable and applicable research or initiatives on technology transfer and soil health alongside rural communities; leveraging their assets and resources to build their own opportunities. By adapting traditional approaches, like dried fish powder as herbicide in Burkina Faso, to climate-smart agriculture, we can improve resilience in rural communities and better utilize existing rural-focused solutions. We should aspire to ways to bridge the gap between rural communities and climate change adaption techniques, so rural communities have access to the knowledge, resources, and support needed to advance their livelihoods in the face of uncertainty.

As an Afro-Caribbean American, pursuing agricultural development with a focus on Africa personally resonates as a means to restore the connection between the displaced African diaspora and citizens of the African continent. The people of Sierra Leone and Guinea, who were often transported to the Southern United States, were violently sought out, kidnapped, and sold for their ability to grow rice in particular. They sewed rice seeds into their hair during the Middle Passage and used their expert knowledge of nature and tropical climates to hide in swamps as they escaped their captors. My grandmother in Guyana grew up wading through rice paddies she did not own, envisioning her life in America where her children would have freedoms and opportunities. This path of opportunities looks different for every child of the Black diaspora. For me, it meant closing the loop and returning to West Africa to work in agriculture. It’s one small way that I can contribute to restoring and transforming agricultural production systems that were perverted to drive one of the darkest periods in history, and yet have the potential to be one of the most powerful tools for growth. 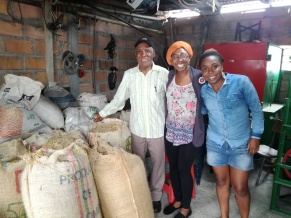 View all posts by Tiffany